Jim emailed me last week about finding out some information on his 1950’s 30″ Kelvinator electric stove. (The 30″ standard size vintage stoves aren’t as easy to come by as the larger stoves of era).

Jim says, “It was purchased new in the 1950’s and put in service. The original owner sold the house including appliances to a single woman in the mid 1960’s.

The range has had two owners, we are now the third.”

This vintage range is in fantastic condition and has been working for all these years. It has the broiler in the oven and a utility drawer on the bottom.

I like it because it has the extra work space in the middle and is a simple, classic style which is easy to maintain.

You can contact Jim at jrpeay@vantageco.net or me at antiquevintage forum@gmail.com for more information.

I am going through a “white period”. A cleansing if you will.

Over a year ago we had a major downsizing.

Our old house was antique country/westerny. We have moved in to the 1940’s “casita” (little house). A charming 2 bedroom, 1 bath with a room off the garage which we turned into a “crash pad” for our wayward adult kids.

Yes, I need to take pictures!

Because of life (getting old and having hubby “health issues” suck) I haven’t done one thing inside this house!! Not one nail in the wall. Didn’t change the ugly, country blue checked fro-fro contact paper in the kitchen cabinets. OK, I’m coming out of a decorating depression.

The stuff is here but I am stuck! Me….a woman with no style!

Oh, did I mention we inherited a beautiful flourishing flower/veggie garden. I HAVE been doing something. I am coming out of my decorating coma…….

I’m really leaning towards doing everything that cottage white.

Love this dresser without the drawers….might find it as “road kill” on the side of the road.

What about this wood letter holder (of coarse I’d paint it white) to hold dishes?

How sweet is this?

A Little Vintage Red for the Kitchen

About RED – Red is the warmest of all colors. Red is the color most chosen by extroverts and one of the top picks of males. On the negative side red can mean temper or anger. In China, red is the color of prosperity and joy. Brides wear red and front doors are often painted red. Red is Tuesday’s color. Red roses symbolize passionate love. Ruby rings should be worn on the left hand. Red is the color of Mars. This planet is known as the God of War.
Red Energy

Red is associated with fiery heat and warmth. It can also mean danger (burning).

Red is the color of blood, and as such has strong symbolism as life and vitality. It brings focus to the essence of life and living with emphasis on survival. Red is also the color of passion and lust.

Yep, the blog is a year old.

I started it, to link to my past employer Vintage Appliances .  For the same old reason, “money”,  that didn’t work out.  So here I am, a vintage appliance appraiser with the blog.

Why am I still doing it?  I don’t make much money from doing the appraisals.

1.   Although I love WordPress,  I would have started out on a site where I    could  advertise.  I have no clue how to change this or switch my whole blog over so it can make money. Help!

2.  When you write, people read.  I don’t consider myself a great writer but hey,  people still read the blog!  So write more often.

3.  You can really make new friends over the internet.  You never see them but they’re there.  I can’t even fathom how much help I’ve got.  Plus a free avatar design from my sweet young friend in Manhattan.  They pump you up and are there when you need moral support.

Send me pics of your kitchen or appliances or questions or ???

Update on The Hoosier Cabinet Series

I’m behind as usual. Xmas is here. Got a bunch of work in from one of my ebay clients and left The Hoosier’s in the dust. But only for a few days!

There’s so much I love about these cabinets. So many things were happening in history at the turn-of-the-century. I find it all fascinating!

In the next week I’ll take a look at The Hoosier Manufacturing Company’s Kitchen Design Book, all those great glass Hoosier jars and how they’ve become one “hot” collectable and what happened Hoosier company.

And lots and lots of pictures of Hoosier’s. Before I venture on to The Hoosier Cabinet, I wanted to take a look at a typical kitchen and what a woman’s life was like in 1890.

Respectability was measured by cleanliness. For the turn-of-century woman appearances were everything: hands, faces, outer clothing, doorsteps and entrances were suppose to be kept spotless, as were reputations.

Women who worked on the farm had a damn hard life – canning, butchering, sewing and mending, baking and cooking, keeping the stove hot all day, laundering, sweeping the chimney, filling the gas and oil lamps, hauling water and tending the garden and the children. Before modern detergents it could take a day to clean one room thoroughly. Laundry work took up 3 – 4 days every fortnight. Give me a break! It’s no wonder 47 was considered old age!

Leisure time for a wife at least was at a premium and religion could play a large part, with many Methodists for example expected to attend chapel twice a day on a Sunday and at least one class during the week. This was often impossible in a larger family (many women were pregnant on average every 18 months and 8 – 10 children were not uncommon with 2 – 3 probably dead in their early years) were most women (unless they could afford a nurse) were almost continually nursing a baby or sick child.

Although rather hidden, evidence is slowly emerging that many women of the time were often ill or depressed (no frickin wonder) for much of their lives, with only minimal treatments available.

The middle class had it a bit easier – maybe a servant or two, a wet sink, a cook stove, ice-chest refrigeration [1890-1922]. By 1915
electric refrigeration furnished the homes of the wealthy, but the middle-class would not see truly modern refrigerators until 1922.

A perfect sized Victorian (which I consider a upper-middle class) kitchen was thought to be 15′ X 17′. Big enough for movement but not too large. It contained a sink, stove, tables, dresser and hopefully connected to a pantry, cold room or a cellar.

Hard wood floors, washable or tiled surfaces, an iron sink, a portable stove rather than a set range, additional tables and a pump or running water were things every home maker yearn for.

Below is a photo of a woman’s tenement kitchen.

While doing research for this post I feel nauseous. The more I read, the more disgusted I am. Woman had no rights, no votes and I’m moving on to The Hoosier Cabinet before I throw up.


I’ve always wanted a Hoosier Cabinet (after I found out what it was). Besides being a big, honkin piece of furniture, it has a function besides hiding all your kitchen clutter.

This week we’ll journey to the land of Hoosier’s and get a glimps of how these pieces fit in the turn-of-the-century kitchen.

If your lucky enough to own one send me some pictures (I’d love to see them and will share on the blog). Send them to ramonasclutter@aol.com

There’s nothing like the old wood and coal stoves. They go from the simple “farm house” style to the very elaborate with all the bells and whistles the Victorians loved.

The old stoves can be converted to gas, electric or a combination of both. Better start saving, we’re talking thousands of dollars but the end result is beyond belief.

Here’s an example of a Majestic Stove Rich Allen and his team at Vintage Appliances here in Tucson has converted to a smooth top gas range with an electric oven.

A 1889 Pilgrim also has been restored with the gas/electric option. This Pilgrim has a wonderful back piece with a colonial design and a pictorial in metal of our ancestors greeting the Indians.

This Copper Clad has been sold but I personally love a stove with porcelain and that blue is stunning.

Here’s a Monarch, not sure what you’d put in that water reservoir – maybe use in as a warming cabinet!

You’ll need a good-sized wall and a good kitchen design for one of these beasts. It’s sad that my kitchen is small and these are way over my budget. Dream on Jan! Dream on!

The Cool Features of The Chambers

In this old advertisement (stolen with permission from Todd at www.chamberstoves.net) we get to see all the cool features of The Chambers. You can see more on Todd’s page on Chambers features

Love the racks that don’t tilt, the handles which little kids can’t work, all the insulation and the features here –

The In A Top Broiler – How cool to have the broiler and “sizzling platter” (you can remove the bottom platter and take it right to the table)
on top of the stove. “No stooping, no squinting and no smoke or fumes”.

This broiler has a heating element on the top lid so there’s no turning. One advertisement boosts, you can make 8 grilled sandwiches at once without having to flip them.
Bring on the Grilled Pastrami and Swiss!

Stole the pic of the Chambers broiler from Josh at Bungalow23. Great site with
his journey at restoring his bungalow and also re-doing and installing his 1951 61C. Some good photos and tips for the do-it-yourselfer. 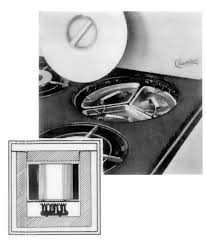 Here’s the ThermoWell which is a well which is independently insulated and used with different “kettles”. The one pictured is a triple. You can cook 3 different dishes all at once!

The C models have a ThermoBaker which you insert into the well to bake pies or biscuits.

Here’s an unrestored one from Vintage Appliances. What color do I want? Love the copper!!

I want a Chambers (hint to “the boss”), if I can’t afford one I’ll just write about them. Maybe the stars will align in my favor and make this dream come true!